The Prisoner of Eldaron Now Available

The Prisoner of Eldaron is the second book in the Crimson Worlds Successors series.  It was supposed to be out the last week of July, but it turned out to be by far the longest book I've ever written.  So it's a couple weeks late, but in return, you get a book that is almost two-thirds longer than MERCS (book one of the series). And if you haven't read MERCS yet, it's on sale for the next two days (just 99 cents).

The Apple ebook and print version are not live yet.  I will update this post when they are. 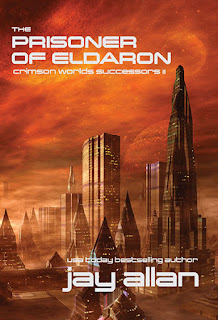 The Search for Erik Cain…


The Superpowers of Earth have fought their final war, leaving Earth a devastated ruin, populated only by scattered groups of survivors living in primitive squalor.  Out in space, however, humanity moves forward, and the former colonies of Earth’s dead nations are now free from the yoke of the despotic governments that had long ruled over them.  For many, it is their first taste of liberty.  But a thousand free worlds, varying enormously in wealth and power, cannot long exist in peace, and soon they begin to fight, to seek to bend their neighbors to their wills.


Darius Cain is the commander of the Black Eagles, the most feared and renowned of all the mercenary companies that fight the colonies’ wars.  His veteran warriors have fought dozens of battles, and they have never met their equals.  The wealthiest colonies compete to hire the Eagles, for contracting with Cain’s warriors is the surest guarantee of victory in any dispute.


But there is another power, one whose very existence has been the most closely-guarded secret in human history.  The Triumvirate.  For decades, it has operated in the shadows, interfering secretly in the affairs of the former colonies while steadily building an invincible war machine.  But the Triumvirate has come to fear the Black Eagles, and the decision has been made.  Darius Cain’s private army must be destroyed utterly before the final invasion of human space can begin.


A message reaches the Black Eagles’ base, with evidence that the father he’d thought long dead might still be alive, a captive of the shadowy enemy, held on a planet called Eldaron.  Darius Cain is skeptical, a man slow to believe what he is told without incontrovertible proof.  But Cain didn’t build the greatest military force in human space by being cautious or timid…and even the slightest chance his father was alive compelled his course of action.  The evidence points to a world on the edge of human space, a highly-developed planet called Eldaron, an insular world, ruled by a dictator who calls himself the Tyrant.


Darius knows he is walking into a trap, but he has no choice.  He will free the prisoner of Eldaron…or he will extract a vengeance beyond anything the Eldari can imagine in their worst nightmares.

MERCS (Successors I) on Sale Until Wednesday

Posted by Unknown at 7:02 AM No comments:

Crimson Worlds Successors I: MERCS is on sale this week for 99 cents at all retailers.  Book II, The Prisoner of Eldaron will be out Monday, August 17.
Posted by Unknown at 4:37 PM No comments:

The Prisoner of Eldaron, Successors Book II, will be out next week.  I'd originally planned to release it the last week of July, but at the last minute, I decided there was more story to tell.  While I write long series usually, I also try to make each book a self-contained story while also advancing the series plot.  So, it's going to end up being two weeks later than I'd hoped, but also about 30,000 words longer (a good third longer than I'd expected), and also the longest book I've put out to date.

I've gotten some emails from you guys, and I just wanted to say I appreciate your interest in the book, and I hope you all enjoy it when it is out.  I feel it is a much better book for the additions.

Posted by Unknown at 2:19 PM No comments: